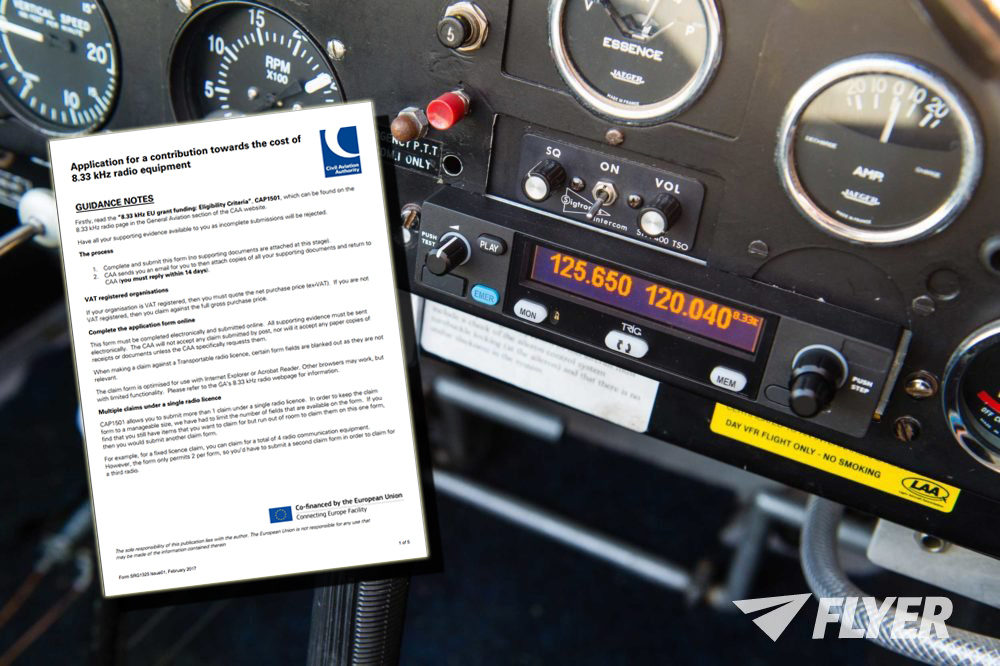 What happens after the 1st of January 2018 if you haven’t managed to change the radio in your aircraft to one that’s compliant with the regulation requiring 8.33kHz frequency spacing? Can you continue to fly, or what? We put the question to the CAA…

“Something to note is that carriage of radio is not mandated on all flights,” said Bob Liddiard, one of the GA team looking after the 8.33 transition. “If you choose to carry a 25kHz radio, then you will only be able to use it on specific frequencies.”

That’s frequencies such as 121.5, the Distress & Diversion (D&D) cell. There are some others too but don’t count on them continuing to operate.

“If we decide to raise temporary exemptions on certain frequencies,” continued Liddiard, “then that simply means that those frequencies can remain on 25kHz for a temporary period, but it doesn’t alter the requirement to carry an 8.33kHz capable radio where it is mandated to do so.”

The change to 8.33kHz frequency for General Aviation was confirmed by the European Union in Implementing Regulation IR 1079/2012 published in November 2012. It says the law changes on 01 January 2018.
“There is no change to this,” said Liddiard.

“Whilst we are seeing the availability of avionics engineers becoming an increasing issue and we can be empathic to people that are unable to get their radio changed in time, the law will change and pilots must adhere to the law. So if their flight mandates carriage of a radio, then it must be 8.33kHz capable. During 2018, ground stations will be changing to the 8.33kHz channel operating mode, and aircraft must be able to comply.

“The availability issue has only recently arisen and over the last five years people would have been able to get the change made in good time, hence avoiding the ‘last minute rush’. Even if the date were moved back, then people would still prolong the change and we’d end up with the same last minute rush. Meanwhile, the need for additional channels doesn’t go away.”

So, to sum up that means that if you fly and need to talk to a ground station such as ATC, to ask for a clearance, or an airfield, to request joining instructions for instance, then you’ll need an 8.33kHz radio.

All those ground stations with a radio frequency will have to change by 1 January 2019.

“There is no schedule or ‘who goes first”, said Liddiard. “We suspect that ground stations will most likely change near their licence renewal date as the cost of an 8.33kHz licence is one-third of the 25kHz licence.

“The charge is set by OFCOM. There will be three times as many channels, hence one-third the cost for each.

“We are currently contacting ground stations to ascertain their intentions. You may be aware that we have also applied for the option of temporarily exempting some ground station frequencies. Again these are only options and we anticipate most will change anyway.

The UK CAA has negotiated a deal with the EU to fund some of the cost of changing. Aircraft owners can claim 20% of the cost. The CAA is really keen for GApilots to make use of the scheme and makes these points:

Please refer to the eligibility criteria document, CAP1501 on the CAA website.